FAC is very serious about our water volleyball!!

(Serious about having fun that is)

Are you looking for an intense, high pressure, only-the-best-will-do type of tournament volley ball? Then don’t come here for volleyball! We play for FUN, no pressure, no skill required. Come on in and meet new friends and enjoy the sun and water. People wander in and out of the games at will – sometimes we play 4 on a team and other times there might be 12 on a team. If you want to join in, you’re WELCOME. We have to warn you though, it’s addicting! Just to show what we’re talking about, we are posting our “no rules” below.

Object of the Game
To be the first team to score 21 points. A point is scored when one’s team serves the ball and the opposing team fails to return it in fair territory during the volley. If the serving team fails to continue the volley by not returning the ball their team will lose the serve to its opponent giving that team a chance to score a point.

Rules of the Game
At the Forty Acre Club, water volleyball is played with absolutely no rules of any kind, although the following conditions, stipulations, circumstances, and situations do apply.

Conditions (because we don’t have rules)
The ball may be hit as many times as needed, both by individuals and by other teammates in any order including repetition by individuals, to clear the net.

The boundaries of the playing field shall be the three concrete sides of the pool and the fourth side shall be the floating boundary set up by a rope anchored at the sides of the pool, which will be moved to accommodate the number of people playing. If the ball shall hit any of the concrete boundaries and return into the pool it shall be considered in play. If the ball shall hit the floating boundary it is considered in play. If the ball hits the fence, scoreboard or pole, it is out of bounds.

If floating boundaries are in place at the two corners of the pool — regular boundary rules will apply. (The line being in, and over the line being out.) The following stipulation will only apply if the aforementioned boundaries are not in place: If during play the ball lands in-bounds but near the steps entering the pool causing a hazardous playing condition the receiving team shall declare “steps” and a do-over will be mandated.

If the ball returns into the playing field after hitting a concrete boundary and is in turn played by a contestant in the game, the ball will be considered still in play and play will continue until such time the ball is out of play.

The serve is required to pass over the net without the assistance of any other player although it may touch the net as it passes.

If the serve does not clear the net a do-over may be permissible if the consensus of the receiving team allows it. Special considerations may be given to first time players, visitors, birthdays or females that enjoy jumping up and down.

If the two teams cannot agree on where the ball landed, in-bounds or out-of-bounds, and no spectators are there to judge such landing of the ball, a do-over will be allowed.

Circumstances
Spiking of the ball will be allowed although one should refrain from spiking for a reasonable amount of time after receiving “the look” from one’s spouse or mate.

One should also refrain from spiking the ball at the short women especially when in the deep water.

During play any player may come in contact with the net at any time. This includes hitting the ball through the net.

Stipulations
If a spectator graciously retrieves the ball that has left the playing field it is customary to reward such spectator with a complimentary drink of his or her choice.

Clarifications
If an object sitting on the pool deck (e.g. Drink Holders, Cups, Cans) is struck by the ball and such ball returns into play, the ball will be considered dead and out of play. 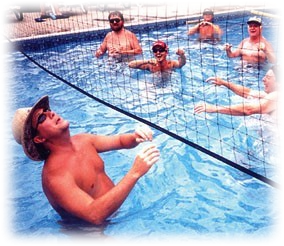